The Churchyard contains some early 17th century headstones and an ancient yew tree. Unusually, St Mary’s has two porches. Enter by the north porch and in the stonework over the 14th century doorway are the heads of a King and Queen and a scene depicting the Annunciation. There is a stoup in the porch. Watch the steps down, your first impression is of white walls, a light and a spacious interior crowned by a wonderful array of 15th century king post trusses supported by heavy tie beams. A spiral staircase in the choir vestry leads up the bell tower to the ringing chamber.

The only remaining part of the Norman structure is the nave which has a narrow Norman window, and further along is a squat Tudor window. In the chancel is a blocked in door and in the other wall a piscina, now used as an Aumbry.

An arcade of five bays separates the nave from the south chapel, which again, has beautiful roof timbers. This 16th century chapel contains the Tyrell family tombs and ten 16th century carved pews. It has a 13th century piscina with a drain and close by on the wall is a 15th century painted altar curtain. The windows here contains some ancient glass and there is a Royal Coat of Arms with an unusual crouching lion. The Font is 15th century.

Go out through the 16th century south porch and look for the medieval scratch dials (Primitive sundials) on the stonework of the doorway. To come to Burstead to see these lovely things would be enough but there is more. A 12th century oak Crusader chest, Registers which tell of the burning at the stake, in Chelmsford, of a local man and the marriage of Christopher Martin, who sailed to America on the Mayflower. The most recently discovered treasures are early 14th century wall paintings in the south aisle including the Nativity, the Annunciation, and St Catherine on her wheel. All the paintings are well documented in the booklet available in the Church.

"Then spake Jesus again unto them, saying, I am the light of the world: he that followeth me shall not walk in darkness, but shall have the light of life."
- John 8:12 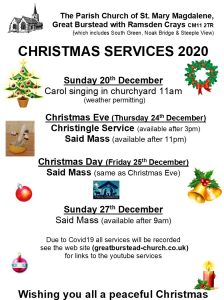 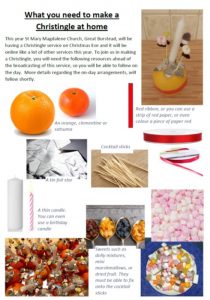